Mark is the 2018 SDA Club Champion with the highest cumulative score of 1935 + 138 X’s (out of 1988 points & 280 X’s possible) shooting in the Adult Male FreeStyle class! Mark also received a gift certificate for a free one-year SDA Membership! 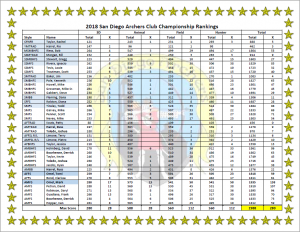 We honor SDA Member Larry Lyford’s recommendation to recognize members who show up for LOTS of tournaments throughout the year. They may not get the highest scores, but they are showing their support for the San Diego Archers and the sport of archery by participating in SDA tournaments once or twice each month.

We call it the FORTITUDE award obtained from the first letter of the words that best describe the awardees:
Faithful, Obsessive, Resolute, Tireless, Impassioned, Tough, Unyielding, Dedicated and Enduring.

Candidates for this Tournament Participation Award were considered among 23 participants who turned in a scorecard for 15 or more of our 26 tournaments (includes nine NFAA Rounds, four novelty shoots & two 900 Rounds) in one calendar year. All were awarded a gift certificate for one free shoot. Anyone who turned in scorecards for 22 or more shoots this year, was awarded a free annual SDA membership and free shoot! 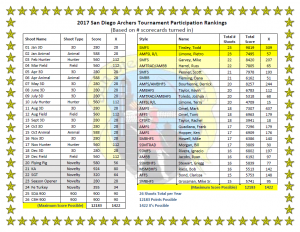 NEW THIS YEAR!  To show our appreciation to our FAMILY members who participate in tournaments, we recognize their dedication with the Family Participation Awards!

We’d like to recognize three families  in particular who EMBRACE SDA archery: 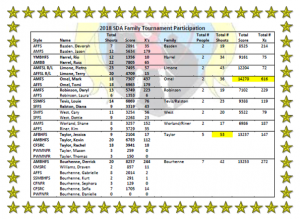