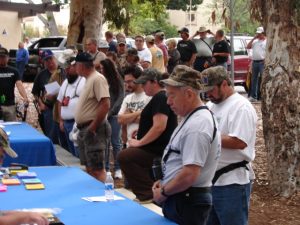 Established 1938 to expand and perpetuate the practice of archery and the spirit of good fellowship among archers in San Diego.

The San Diego Archers archery club has been an active organization since 1938.

Prior to 1938, archery had been a popular sport in San Diego, mentioned in local San Diego newspapers as far back as 1924. It was during that time that a small group of target archers formed San Diego’s first archery club, the “San Diego Archery Club.”

The San Diego Archery Club was prominent in Balboa Park into the 1940s, with an archery range located at Sixth Avenue and Laurel Street. See this excerpt from the “A Guide to Balboa Park, San Diego, California, American Guide Series, 1941” below:1

“The San Diego Archery Club, affiliated with the National and the Western Associations, was organized on February 11, 1924, with six members. The late Joseph Jessop, donor of the famed archery exhibit in the San Diego Museum, was its first president. In September 1924, the club was granted permission to use the present Park range.” In 1938, a group of field archers asked for their own range and were given an area formerly used as a reproduction old West town called Gold Gulch. Known as the “San Diego Field Archers,” they operated in Gold Gulch for roughly twenty years.2

In the late 1950s, the field archer club moved to its current location in Balboa Park. It was around this time as well that park officials determined that target archery had become too hazardous to remain on the lawn at Sixth Avenue and Laurel Street, and the field archers were relocated to the Morley Field Target Range, near the eastern boundary of Balboa Park.2

Even though both archery clubs, San Diego Archery Club and San Diego Field Archers, operated separately, many local archers were members of both clubs into the 1960s.

It was in the 1960s that both clubs merged as one club, calling themselves the “San Diego Archers” archery club.

Later, in 1992, the National City Turtle Archers merged with the San Diego Archers club. The two clubs had been sharing both the Rube Powell Balboa Park Archery Range and the Morley Field Archery Range for a number of years.

The Balboa Park and Morley Field Archery ranges are the last remaining public field archery ranges in Southern California. These ranges are maintained for public use to the entire archery community and are solely supported by the members of the San Diego Archers.

In 1994, the name of the Balboa Park Archery Range, located off of the Alcazar Parking lot, was changed to Rube Powell Archery Range to honor one of San Diego’s great athletes.

Rube Powell, a member of the San Diego Archers since the 1950s, passed away some time ago. Rube Powell was truly a gifted archer whose accomplishments in Tournament Archery competition remain unequalled. He was a winner of the prestigious National Field Archery Championship a record five times. In addition, he won too many regional, state, and local tournaments to list here. Rube was inducted into the San Diego Hall of Champions in 1994, elected to the National Archery Hall of Fame in 1976 and to the California State Hall of Fame in 1977.

But for all of Rube Powell’s accomplishments, those who had the privilege of knowing him remember him best for what he gave back to the community—his love and support of archery.

Because this man gave the archery community so much, the members of San Diego Archers decided to honor his memory by renaming the archery range after him.

The Balboa Park Archery Range has been the site of numerous national archery tournaments.

In 1962, San Diego Archers held the first King Arthur’s Day Tournament, an archery event that has become an annual gathering of young and old, attracting over 200 archers from California, Nevada, Arizona, and Mexico.

In 2006, San Diego Archers hosted the first Border Shoot, a competition between California, Arizona, Baja California, and Sonora states archers. It is an annual event that rotates each year to the winning state and involves four classifications of archery styles.

Over the years, Balboa Park Archery Range has supported other local clubs when their ranges were not available. For example, in 1993, the San Diego County Bow Hunters utilized the range Read more...